Reach for the Sky...

So finished another painting tonight based off a photograph taken by an old high school friend named Thyra.  With her permission, I've grabbed several photos off her FB to use as inspirations for paintings.  She's an amazing photographer! Just want to say thanks, Thyra, for letting me paint from a few of your photo's!!

I have no idea where this is, but the orange rock contrasting against the blue sky and grayish-blue bushes in the foreground just really caught my eye.  I added a few clouds for some interest in the sky.  Spent a few nights on this one and decided to call it done tonight. It really doesn't do the photo justice, but I think I did alright capturing the colors. Thanks again, Thyra!! 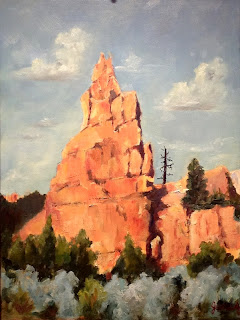 J. Kevin James
I guess you'd call me an artist in training. I'm an engineer by day and artist by night (or weekend). I've been painting since fall of 2008 and the more I paint the more I enjoy it and the harder I work at it. While not every painting is a glowing success, it's worth all the failures to create that "one" that comes together just right! So far my learning is from books, blogs, DVDs, forums....oh, and of course, practice. I hope you enjoy.
Comments and critique always welcome!